Working at an auctioneers can lead to all sorts of temptation - I even bought something at my interview! 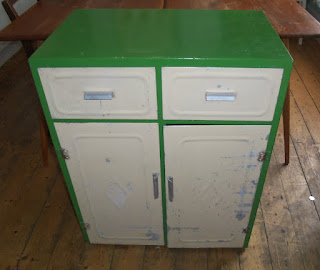 But Mr Locket quickly made it clear that he was not keen on me bringing home lots of rubbish goodies after each sale so for the last 2+ years that I've worked there I've actually been very good and can only think of my blue sundae dishes and a sewing box that actually came home with me. 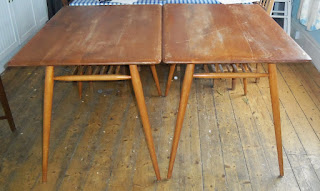 However, this week I had a bit of an abberation and found myself buying a gorgeous painted metal kitchen cupboard (scrap metal to Mr L), 2 Ercol dining tables and an old tea trolley that I plan to paint. 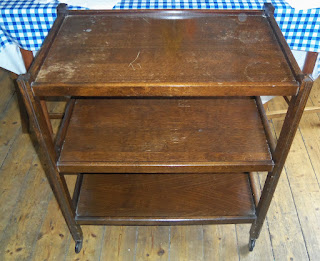 My colleague gave me a lift home in his van and I piled all my new treasures up in the hall - blocking it completely.  Mr Locket's reaction when he got home was stunned silence followed by "What's all this @*£%?" I was hiding behind the kitchen door giggling like a maniac.  Then he found out that I had actually paid good money for it all too!

Once he realised that I was planning on using everything in my sewing room in the garage - rather than cluttering up the house - he was greatly relieved!  In all honesty he's such a sweetheart that he never complains whatever I do and tolerates an awful lot.

We are actually going to be extending the sewing room to take up the whole garage rather than just half so we had spent the weekend before clearing out lots of junk - so you can see why he was rather dismayed to find more arriving!

I'm really excited about the new plans for the sewing room as it has become rather cramped and untidy with far too much stored out there. 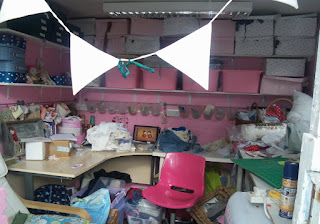 Also, I never seem to craft on my own these days as the girls and sometimes Fred are keen to be sewing too.  The existing room is big enough for 1-2 people but extending it will make it so much better.  It also proved to be a great place for Dot to do her revision as it can be made relatively tidy (unlike the rest of the house) and it is quiet and away from the hustle and bustle.

Other news in Locketland - the chickens are settling in well and we have started letting them out to explore the garden at the weekend so they've been having a great time pecking around and making dust baths. 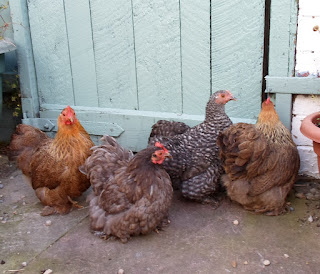 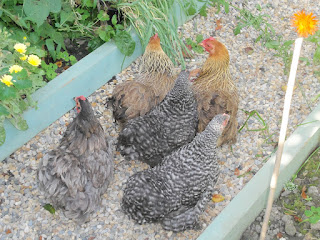 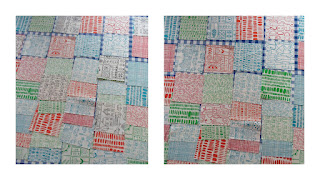 I can't decide if I like them best with or without the black and white fabrics - what do you think? And should I just make a very simple quilt by sewing them together in squares and let the fabric do the talking or should I make pinwheels as I've found an amazing tutorial here that I really want to try? 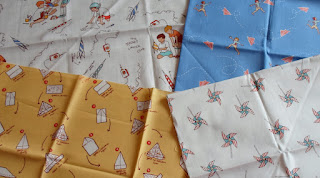 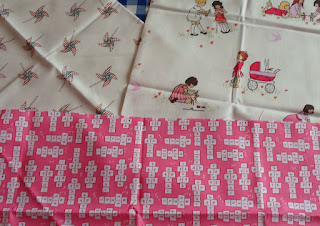 I know I'm a bit late to the party with both of these fabric ranges but I think I will have great fun playing with them - so that's what I'm off to do now!

My mojo is back with a vengeance! Hurrah!

I know I'm meant to be blogging about Dot's birthday and our fabulous holiday in Italy but I just had to tell you that my long-lost crafting mojo has finally returned and I'm delighted! 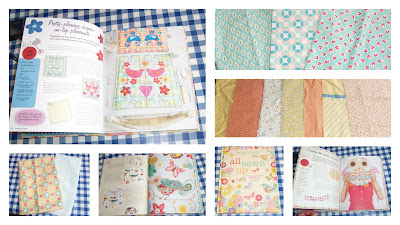 It only happened towards the end of last week when I picked up my crochet blanket and joined a few more squares together while watching a film, then I was blog-hopping and saw something a friend had made that I knew I wanted to sew for a birthday present (so I can't show you what it is yet) so I started that, then I was on Ravelry and saw Michaela's Leftie that her mother had knitted for her and I knew I had to do that too - so I really didn't want to go to work on Friday - I had far too much to do!! 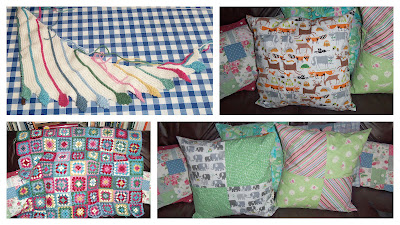 On Saturday it was my birthday and Mr Locket and the children had ordered me some craft books including this one and this one, then I went to my local(ish) patchwork shop and bought some fabric then drove on to lovely Katie's workshop Make at the Whitfield Village Pantry.  It was great to see Katie again and she was so inspiring (as always) and I left with my head crammed full of ideas of things I wanted to make including these "studio boxes" from this tutorial.

The little Lockets were also inspired (although Mr Locket was so relaxed on Katie's sofa that he fell asleep) so on Sunday afternoon we set to work and I made Daisy and Fred simple patch cushions using their fabrics (I totally love the Ed Emberley on Fred's cushion) while Dot was busy sewing crazy patches in practice for her GCSE textiles project.  I then made myself a denim box and then on Monday made Daisy's friend the cream one - Daisy designed it and did all the buttons while I did the rest of the sewing. 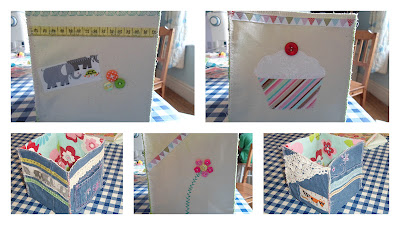 So lots of happy crafting! And even more fabric is going to be arriving in the post tomorrow hopefully :o) it's a great way to spend your birthday money!!