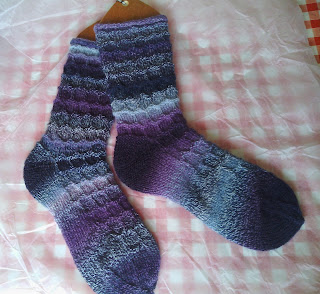 Just a quick post to say hello and thank you for all the lovely comments on my last post. I really hadn't expected anyone to read it and I'm sorry I haven't had the chance to thank you all individually.

I've been knitting more socks and doing lots more running and I still can't quite believe it,  but I've signed up for The Great North Run in September!

Me doing a half marathon!

But I'm hoping it will become "possible" and that I'll raise lots of money for The Red Cross by doing it. 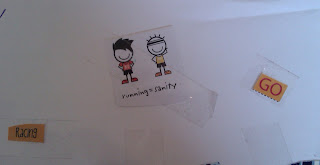 I apologise before I start because this is going to be a long and relatively boring post and I really don't expect anyone to read it!!! As Sunday's run was my first official race I wanted to have a record of the day to look back on and here is the best place for it.

I was really nervous before the run as I knew I couldn't run the whole distance without walking and I was going to be running on my own (with the 1601 other runners!) and I am more used to running with someone else for company and chat.  Also I had no real concept of what it would be like to be with so many people.

Fortunately my Weight Watcher's leader had 2 other members running and she linked us up on Facebook so I was able to talk to one girl who had volunteered on the course last year and knew more about the run and then on Saturday night I got a message from the other lady saying she was going on her own and happy to meet up beforehand.

So once I had pinned my name and number to my top Mr Locket drove me to the Stadium of Light and dropped me off.  The first thing I noticed when I left the house was how windy it was - I really don't like running in the wind, it's just hard work!  And it was cold too.  When I got to the stadium I met up with Leanne and we stood in the entrance for about 10 minutes absolutely freezing in the wind.  We decided to go and see if we could meet up with the other lady, Emma, and as soon as we stepped outside the temperature rose dramatically - we had obviously just been in a wind trap.

We didn't find Emma  but started to move to the start point of the race as we had to be ready at 9.40, 20 minutes before the start.  We were just chatting when the announcer suddenly said "And a  big Hello to Lucy! Down there in the green top.  She doesn't know where I'm talking to her from! Give us a wave Lucy!"  this really made me smile - once I had registered that he was talking to me! 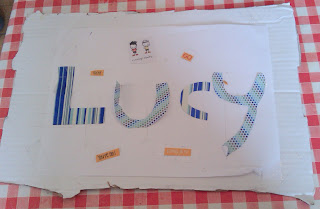 At 10 the race started - slowly as the crowd started to thin out and I thought I was going at quite a slow pace.  As I was about to cross the Monkwearmouth bridge I suddenly spotted Mr Locket, Daisy and Fred with this lovely sign that Fred had made for me.  I hadn't been expecting them until later in the race so it was lovely to see them and I ran over and gave them all a quick kiss before setting off again.

I had Endomondo running and was amazed when the first mile was announced and I'd done it in 10 minutes 20 - much faster than I'd been expecting.  At the entrance to Mowbray  park everyone ground to a halt as there was a bit of a bottleneck to get in but we soon set off again.

There were lots of water stations along the route with special race day sippy pouches of water - I rather wish I had kept one!  But I found it really difficult to drop them on the floor like everyone else!

Mr Locket and the children were waiting for me at the Glass Centre along the river and I had a quick drink of squash and took a couple of Jelly Babies to keep me going - although I have to admit I struggled to chew and run at the same time.

By the time I reached the Marina I had forgotten about the name on my top so got a real surprise when a Lifeboat man shouted "Come on Lucy!"  Again it cheered me on.  I tried to acknowledge the spectators along the route who were clapping and cheering and smiled at them as I passed - so again I got calls of "You can do it Lucy. Keep going!"

I'd been trying to get through each mile by dedicating it to a different person who had sponsored me - for example, mile one was for my boss Giles so I pushed myself on thinking about the fact that he is going to be running 50 miles in the Lake District in the summer and my reasoning was, if he could do that then I could run one measly mile!  Mile 2 was for mum and dad and mile 3 was for Jonathan and the children. By mile 4 I was beginning to flag - I was trying to run it for my other boss Caroline, thinking about the wild swimming she does and again thinking if she can swim a mile in a lake then I can run a mile on easy ground - but just before the end of mile 4 I hit a slight hill into Roker Park and I just had to walk a bit. Mile 5 was for my running friend Jill but by now I was tired and needing to walk every now and then.  And by mile 6 I was just trying to keep going and had given up dedicating miles!!

As I was walking towards the exit of Roker Park I felt a pat on the back and a lady running up behind me said "Come on, you can do it!" so I started running again with her.  I noticed from her t-shirt that she was a SeafRUNt Smiler and I remembered that Emma, the other weight watcher I hadn't found, had said she was going to be with them so I asked her how Emma was doing.  I also started cross-examining her about her running club, where they met and when etc until she said she was really sorry but she couldn't keep talking and running!

The last mile and a bit was tough as we were running into the wind by now.  I had a few walking spells - but they can't have been very long as my times were still good.  I was determined to cross the finish line running and I had tried to speed up for the end - but it just didn't seem to get any nearer!  Then finally I was there and when I checked Endomondo it said I had done it in 1 hour 11! Amazing - about 10 minutes faster than I had been hoping. 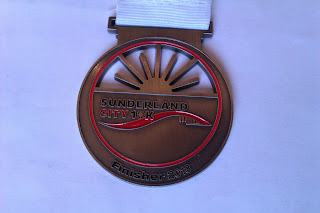 I then had a long wait in a queue to get back into the Stadium and receive my medal, then my goody bag, then a t-shirt and finally a banana.  I was rather disappointed not to get one of those foil blanket things - I would have felt like a real athlete then! 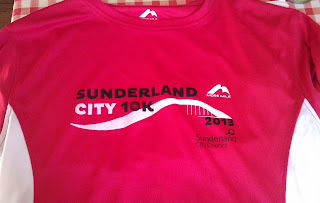 By the time I met up with Jonathan and children they were pretty cold so we set off for the car not realising that our friends Sally and Peter had come to the stadium to see me so we missed them which was a shame.

But I was really pleased with myself for having been brave enough to do the run and I was delighted with my time.

And now I want to enter more races and join the SeafRUNt Smilers running group and run as much as possible! So I'm looking at doing the Pier to Pier from South Shields to Sunderland in a couple of weeks and the Gateshead 10k in June - I've been bitten by the bug! (Edited to add, I've had a rethink about the pier to pier as it is partly on the beach and I haven't run on sand yet - but I've just signed up for the Gateshead race)

And after seeing the photos of myself in Mr Locket's borrowed green top I've just been into Newcastle to buy one that actually fits me - and some size 12 running trousers!!  One photo I will definitely NOT  be sharing is the official one taken on the day - I looked it up on the website and it honestly looks as if I am about to die!  It is so terribly bad that it is actually very funny!

Huge congratulations and many thanks if you have got this far - I really didn't expect anyone to read this!  I'll be back next time with some crafting news instead. :o)
Posted by Locket Pocket at 15:53 14 comments: