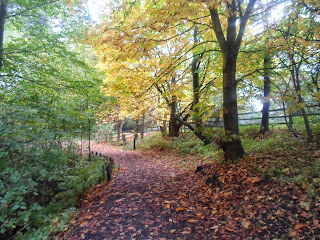 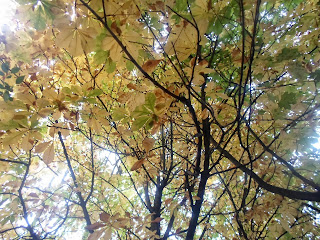 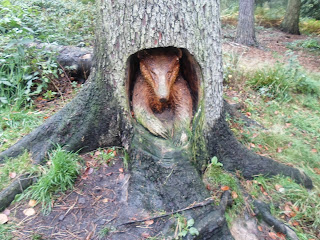 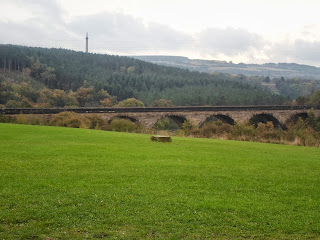 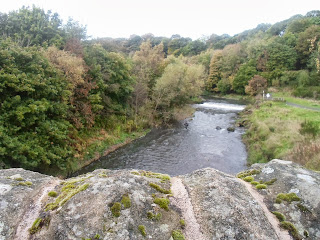 On Saturday we all went for a lovely family walk with our friends Sally, Peter and Billy to Thornley Woods near Newcastle.  It's a lovely place to walk and we have often had fun expeditions with our friends. I'm sure if I was patient I could trawl through old posts to find you previous trips - but I'm not patient enough :o)

The river photo is actually of a fisherman who caught at least 10 fish while we were watching but let every single one go again.

The colours weren't as deeply autumnal as I was expecting but it was still beautiful and I got some nice photos - including lots of the children but I don't think they'd let me post them anymore :o(  If they agree I'll update later.

My fair isle obsession is still in full swing - I'm just so delighted that I now have the confidence to attempt to do this type of knitting.  I don't get perfect results but I have all the fun of the patterns to play with.

The plain grey hat that I had knitted for Mr Locket wasn't deep enough (because I'd mis-measured, although initially I thought it was the pattern's fault - I should have known better!) so I decided to try again so that it would have a deeper fold over for the brim -  only this time I was going to include colour work.

The first attempt:  I didn't like the colour combination - so I ripped it back

The second attempt: Again the colour combination was wrong........

The third attempt:  I put the colourwork band in too early so the brim would cover it up completely 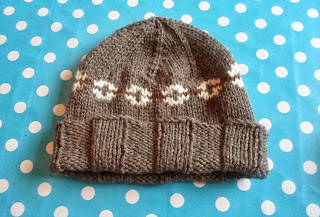 Finally I knitted a hat that was roughly the right size, had a colour combination I was happy with and had a deep enough brim.  There are still problems - like the colourwork is now too far up the crown and the brim could have been a bit deeper but on the whole I'm pleased with it and feel confident that I can develop further hats for the children - especially after all that ripping out.  Happily Mr Locket really likes it and was very kind and modelled it for me - now he just has to wait until his birthday next month to be given it - unless he has any cold days on site planned in the meantime when I'm sure I'll relent. 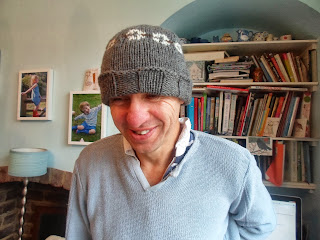 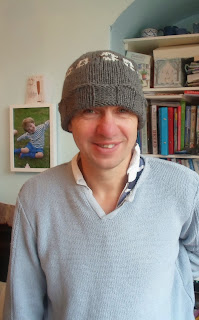 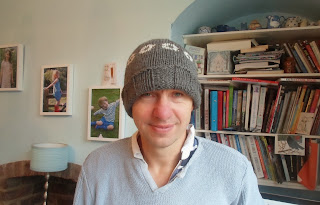 The whole time I've been knitting Mr L's brown, grey and cream mittens and this hat to match I have had a hat in my memory from when I was a child.  I remember loving the pattern on the hat despite it's not very childlike colours but I always found it a bit scratchy to wear.  I was fairly sure Mum and Dad still had it in a drawer some where so when we went to see them yesterday I had a quick hunt and there it was... 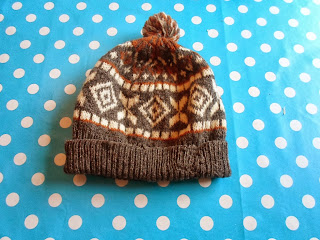 ..... a real McCoy Shetland hat from Tullock of Shetland that I'm sure I have had since I was about 6!

The ages spent with Dot in the wool shop a couple of weeks ago trying to decide on the colours for Mr Locket's mitts would have been much easier if I had remembered this hat earlier instead of part way through the knitting! 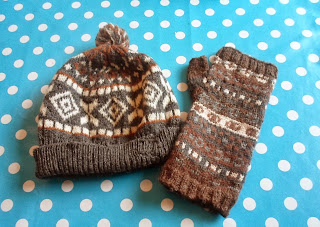 Did I mention I love fair isle?

Thank you for all the comments on my last post - sorry I haven't replied yet. I'm not sure if I told you before, but the archaeological firm that Mr Locket worked for closed down in July so he set up his own consultancy firm with two colleagues.  He is now based at home and working hard - which means I very rarely get on the main computer where I can reply to emails!  Not that I'm complaining in any way - I think he is a complete star and as soon as I can I will reply to your messages :o)

This obsession has gone too far! 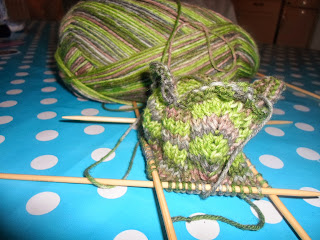 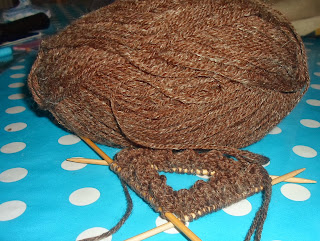 A hat for Mr Locket's 50th birthday next month 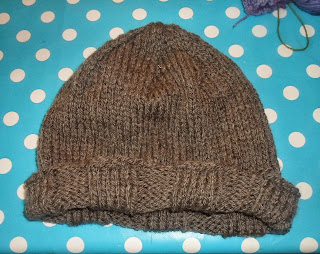 Secret mittens for a Christmas present 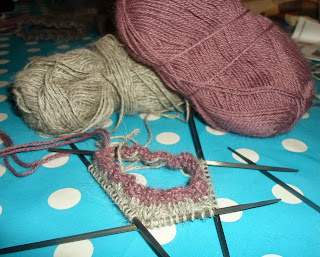 and a lacy Baktus that I forgot to photograph

So the obvious thing to do today was to knit a little bit of three of the projects, sew in the ends on others and then cast on something entirely new! 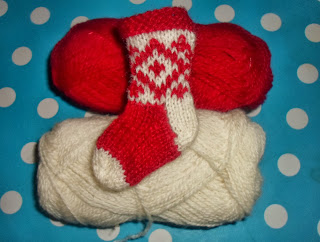 Well I had to. It was entirely essential that I test out my new Jamieson and Smith Shetland wool to see if it really was better for fair isle knitting - it was - but it's not soft and schmooshy like my angora - it just looks ten times better.

This is my secret project before blocking

and this is it afterwards

Still bumpy and uneven but a bit better - and they are lovely and soft so I think I can live with it.  I've decided to try knitting the second one with different needles. 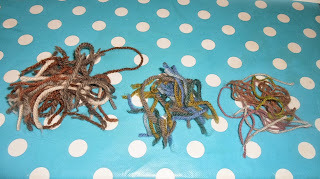 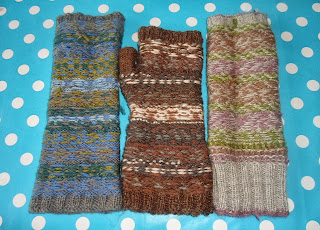 but I don't understand the current fashion for fair isle cardigans and jumpers where the wrong side is worn on the outside and the lovely fair isle pattern is hidden inside!  Bonkers if you ask me!

Tuesday: ETA just cast on another 2 projects!
The inside out cardigan was in Peacocks here
Posted by Locket Pocket at 22:18 10 comments: 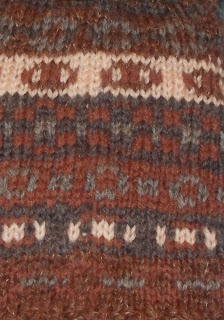 I'm really enjoying knitting at the moment - can you tell?
Posted by Locket Pocket at 18:15 8 comments:

Some things I discovered today 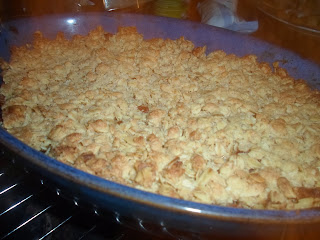 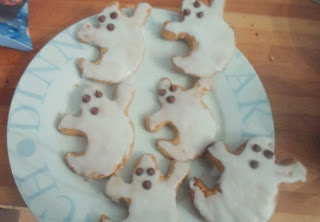 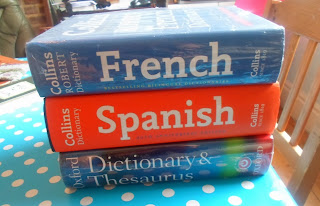 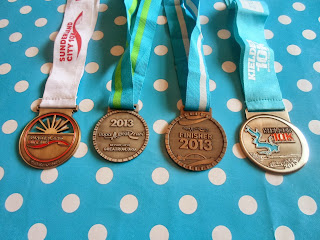 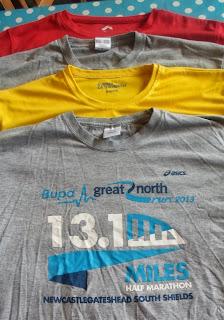 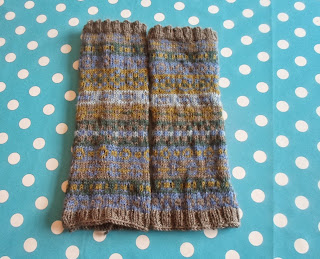 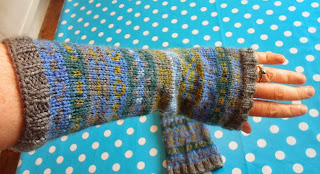