Dipping my toe in the water again.....

Once again I've left it for ages between posting - it's just hard to get back into the habit of photographing and documenting life when you haven't done it for a while. 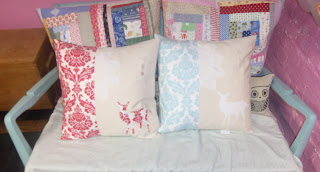 Exciting news on the craft front was the extension of my sewing room in the garage so that it is now twice the size with two more large tables and a sofa so many happy hours have been spent out there lately with room for the whole family to craft, study or read - I love it!

And with this extended crafting space there has been a dramatic increase in my crafting output - so much so that I have decided to dip my toe back in the water of craft fairs and selling - something I haven't done for quite a few years. 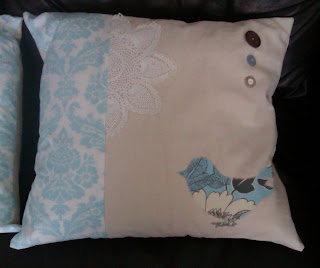 I can't say it has gone tremendously well!  The first sale was ok - I had a few patchwork wallets, some crochet corsages and a couple of cushions but most of the visitors were elderly and either said "Ooh Betty could make those!" or "They're a bit young for me dear!" ;o)  But I did sell about £60 worth of stock which was good and then my lovely boss bought a lot of corsages for Christmas presents too.  Yesterday's sale was less good and I only made £12.50 on top of my stall fee (which was only £10 - so yes, I only took £22.50!)  But it was a nice day and I was there with one of my closest friends who had a stall next to me.  It wasn't really a craft fair - we were the only two actual "crafters" there and the focus of the day was more on winter family fun - but it was good to try laying out my increasing stock on the stall.  Afterwards we went to stay with mum and dad so the children could help with the Christmas cooking and when I showed mum my things she fell in love with one of the cushions and a corsage and wouldn't let me give them to her but insisted on buying them which was so kind. 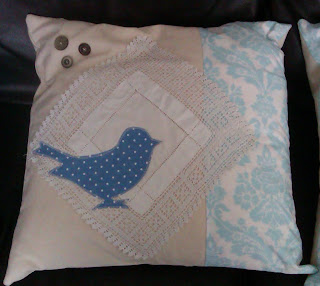 I have a stall at the girls' school this Thursday evening and one at our village infant school on the following Thursday, then a local coffee shop have said they will sell my things for me. I'm going to make a few more pencil rolls for the infant school sale but unless I have some dramatic sales I don't think I will be increasing my stock much further.  It has been fun trying to sell again but I don't think I have the drive that I used to have and as I'm not making commissioned personalised items anymore I don't think I have the appeal that I used to have.

One good thing about yesterday's sale was that I had plenty of time to start knitting Grandpa Biscuit's Christmas present socks - I'm up to the heel already (they're dk thickness so I haven't done all that much knitting really but I'm pleased to have started!)

So that's my news - oh, and I forgot to tell you, you know that lovely metal cabinet that I blogged about in the last post?  It turned out that it didn't fit in my sewing room after all so I ended up selling it in the next auction!  It was far too stylish for me anyway! ;o)

P.S - yet more news!  I've lost 3 stone and have celebrated by having all my hair chopped off so I no longer look like a scarecrow

I've finally managed to upload a few photos but this is all I'm allowed - apparently I've used up my free quota of space for blogging pictures - has anyone else had this happen?