The children were delighted and my colleague who dropped it off said they were acting like he had a van load of puppies rather than an exercise bike! It is definitely an eyesore in the sitting room but while it is being actively used by the whole family it can stay there. 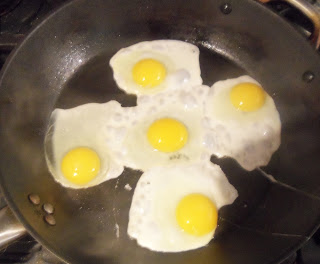 I've been reading Soulemama's blog again over the last few days.  I haven't read her for years because I stopped when I just got overwhelmed by how lovely and perfect her life appeared to be.  Reading it again has reminded me of how inadequate I feel about my parenting skills - while I find myself loving what she is doing and wishing I could recreate it in some small way.  It even made me long to buy wholesome handspun wool in shades of brown to knit something homely!

I know every parent has times of feeling inadequate - I know I have ALWAYS felt that way but looking back on when the children were little I think they probably did have a lot of fun and creative play.  Dorothy is still very creative and spends most of her time reading, sewing or knitting when she is not doing GCSE work but Daisy and Fred seem to have got into a rut of watching telly and playing on the computer and they admit they are bored by it!  The other day I was delighted when they broke out the Playmobil again but I know those days have really passed.  Daisy has picked up knitting and finished her cowl and is now tackling purl stitches and rib before moving on to a pair of legwarmers.  She even came to Knit Group with me and Dot on Saturday :o)

I just really feel like I need to make some particular effort to re-engage with the children - play games with them more often, encourage reading and crafting - all things they love - and switch the telly and the computer off at least sometimes.  But it is so easy to get into the habit of letting things slide and it can be hard to find the right balance of "chill out time" and activity. I'm probably being a bit hard on myself really - but I do need to do more.

One good thing is that Fred has joined the Scouts.  He used to be a Cub years ago but got bored with it (and we were struggling to pay for all three to attend) so he stopped and I wasn't really sure how positive he would be about joining again - he really does love the telly and the computer and something that would take him away from them for a couple of hours in the evening wasn't necessarily going to be welcome especially as it would be almost straight after coming home from his childminder.  But he seems to be really engaging with it and enjoying it.  So far this month he has made "junk" musical instruments, been rock climbing and is having a visit from the Police tonight then next week he is going scuba diving!  He has even agreed to go on a two day camping trip in March which will involve quite a lot of  that horrible activity - walking!  (He and Daisy have been fairly allergic to the idea of walking for a good couple of years and will never come with us when we go - it has been rather liberating now that we are able to leave them at home in Dot's care and go out by ourselves!)

How do other parents with children over 10+ keep them occupied and engaged?  What can I do to do things better?

And the only photograph?  Evidence of one big improvement I've been making lately - getting up early enough to have a family breakfast together rather than the usual morning chaos - fried eggs from our lovely hens.
Posted by Locket Pocket at 14:44 18 comments:

Will you play a game with me?

I bought something at the auction at work last week and I want you to try to guess what it is...........

Here are some clues: 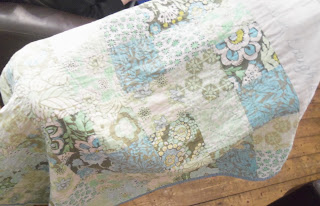 Is anyone still out there? 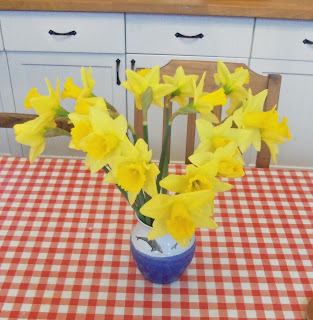 I'm a  bad blogger!  I used to be really good but now I am failing terribly.  But I love reading people's blogs about everyday life and really like looking back over the early years of my blog as it is really a precious diary of things that were important to me.  So, I am going to try again!  I don't think I'll be blogging several times a week but I will try to post more often than once every month or two.

I can't catch up on all that has happened since my last post - so I'm just going to start afresh from today........

I'm always impressed when people tell me they are going to tackle their WIPs instead of casting on something new and exciting and I invariably tell them to forget about it and indulge in the new treat!  But lately I have actually been catching up on some of my own abandoned projects - although I can hear new temptations calling me at the same time (so it's a good job it is too cold for me to venture out to the sewing room and start this project that seems to be sweeping across blogland!)


So, armed with a new desire to finish a few things off coupled with a renewed enthusiasm for knitting after all the crochet flowers I'd made to sell,  I picked up a pair of Monkeys that had been lurking on the needles and completed them on New Year's Eve.  Then I moved on to a very neglected pair of socks - ones that I had actually started in July 2010 on our family history trip to an Iron Age hillfort (hence their name of "Round House socks").  I had really enjoyed the pattern and the yarn (a lovely soft merino blend from Loop) but for some reason I'd only  knitted one sock - which had duly been worn for a couple of years along with other odd socks.  But this year I started - and finished - its partner, and I love them so I'm very happy.


When I was looking for some more dpns I found another half started pair of No Purl Monkeys but I can't remember when I started them.  Sock one is now finished and sock two has been cast on then set aside - you can't have too much of a good thing now can you?


Another project I found on my needle hunt/tidy up was a mystery cowl - no ravelry project page for it so once again I have no idea when I started it but fortunately it is totally simple and easy to see the rough pattern so I'm just going to do a bit at a time (it is very boring) until I run out of wool. 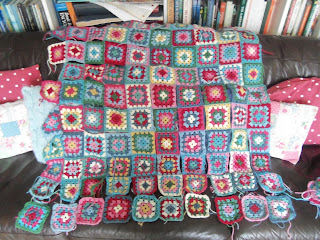 Then this weekend Julie blogged about her new crochet blanket project which reminded me that I really should be getting on with my very old blanket so I have been trebling away happily playing with colours again.

Meanwhile the younger Lockets are doing their best to improve on their mother's standards.  Dot is becoming a really accomplished knitter and made scarves for me, Mr Locket, Grandpa Dog and Fred for Christmas and birthdays, followed by a fabulous cabled cowl for me (just because she loves me) and these wonderful cabled mittens that she made for Daisy for Christmas (she was knitting them in bed at 6am on Christmas morning after we had opened our stockings!).

I wear my cowl all day, everyday and I'm far prouder of it than anything I have ever made myself.  She has now embarked on a project to knit a blanket using different techniques for the squares using this book and has so far tackled lace, cables, intarsia and other textural knits - she is way ahead of me at her age.


Daisy has also started knitting and is working on a really long cowl in Big Softie - I just love seeing my girls sitting knitting on the sofa - I would show you a photo but I don't think they would appreciate it now!


Like most of the country we have had quite a bit of snow and more was forecast for the North East but as we are on the coast it seems to be falling as sleet rather than heavy snow so the children were very disappointed not to be getting a day off school.  I'd quite like a bit more snow too - it's better than the slushy mess we have at the moment - but hopefully it will all go away before too long so I can get back to my running. 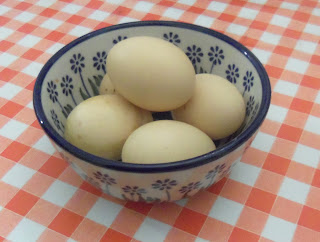 Fortunately the cold weather hasn't put the chickens off (although they spend the entire day sitting on their perch) and one of the lovely ladies has started laying eggs!  We lost a couple when she laid them on the concrete patio and they must have cracked so the hens ended up eating them but finally we have five and I plan on frying them for the Lockets this evening.

Hopefully now I have written this post I will be inspired to blog more often - if anyone is still out there reading??