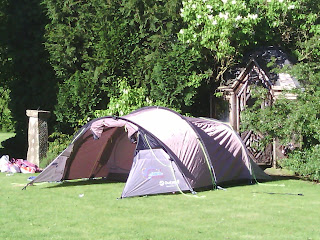 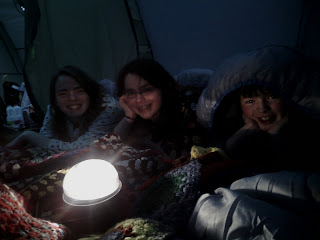 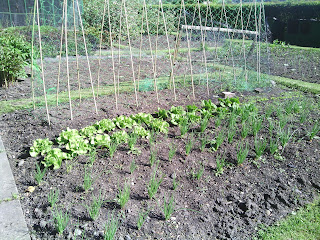 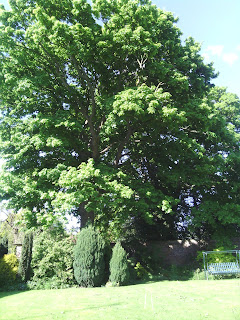 Once again it has been a long time since I last posted but lots has been happening in Locketland.  We have had two birthdays and two birthday camping adventures in the wilds of my mum and dad's beautiful garden! We are SUCH intrepid adventurers.  This was glamping at its most luxurious :o)  We are currently planning a more adventurous expedition to camp in a real campsite soon....

Fred is modelling his new birthday slippers and is obviously very pleased with them - although 20 days later they are looking rather worse for wear.  I don't know what that boy does to his slippers but they NEVER last! Or maybe it's his new dart board he is pleased about?! 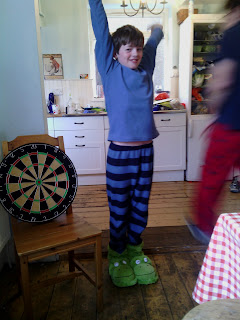 There has been lots more running as I am trying to increase the distance I can run each week.  Mr Locket and I have been having lovely Sunday runs along the coastal footpath and I managed to get up to 8 miles a couple of weeks ago. 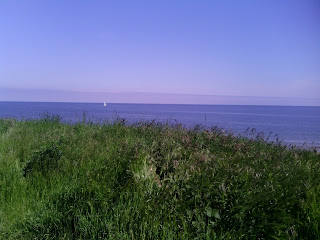 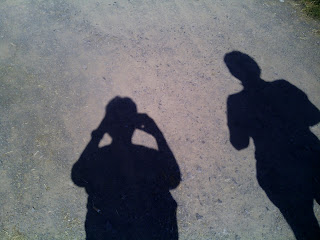 The last few weekends have had camping trips or official runs like the Bupa Great North 10k that I did on Sunday (in 1.07.47 which is nearly 3 minutes faster than the Sunderland 10k in April) I have also been going to three running clubs each week although this week I felt rather tired and stayed at home instead! Maybe I've done a bit too much running...............

......which leads into my more recent activity - KNITTING!  Yes! I have finally picked up my knitting again!  All that running had really got in the way of being creative.  I have found, as I've got to know myself better and better, that I really am a very "passionate" person - by which I mean that I get great enthusiastic passions for certain things and pursue these new hobbies obsessively and everything else gets left behind.  So when I'm in a knitting passion all I want to do or read about is knitting, likewise with gardening (although that hasn't happened this year), and I've found it particularly the case with running.  Instead of carrying my sock knitting and craft magazines around with me my bag is usually full of running books and magazines and my training journal for The Great North Run.

What I need to learn to do is be more balanced about my hobbies (and the housework, if I'm honest) but I can't see my personality changing any time soon!

I joined a sock KAL a month or so ago and knitted one sock using this pattern but then got bored with it and gave up on the second sock during my knitting drought.  But I have picked it up again and I am now knitting the second one in this pattern. Completely different but the yarn is the same and I don't expect anyone will be inspecting my feet that closely!

I bought Julie's Little Cotton Rabbit patterns as soon as they became available (even though it was during the knitting drought) and then I started reading the Ravelry group posts about them and when her new Seasonal Dresses became available Dot and I hurried to cast on.  I have pleased myself no end by printing Julie's patterns and feeding them into poly-pocket document holders so I have two new "books"!  I can't get over how beautifully written and presented the patterns are. 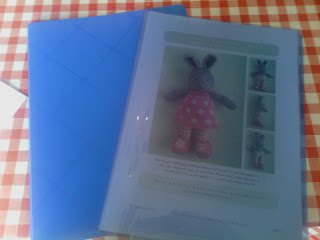 Yesterday we snuck up to Newcastle on our own (Dot has finished her GCSE's and is on an 11 week "Summer of Freedom" holiday now!) and went to The Knit Studio in Blackfriars. 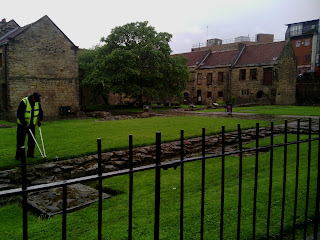 We received a warm welcome and a lovely cup of tea and spent a happy hour or so choosing yarn for our bunnies and their clothes and knitting with the other shop visitors for a while. 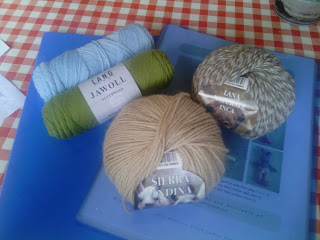 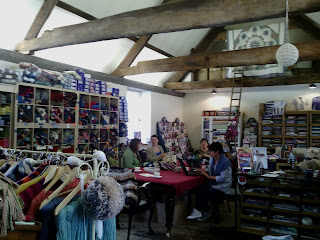 Anne Makepeace, the owner, was so helpful, searching Ravelry for worsted weight patterns when I was choosing wool for socks for Grandpa Biscuit and advising me on my tentative first steps with fair isle knitting. 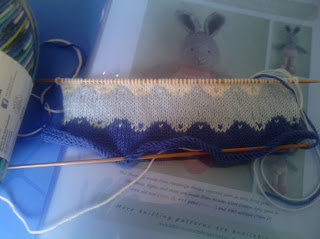 And today poor Fred is off school poorly, Daisy has gone to Flamingoland with school and Dot is volunteering at the Infant School so now this post has been written and the house has been tidied (a little bit), I'm going to sit and knit for the rest of the afternoon with my poorly boy.